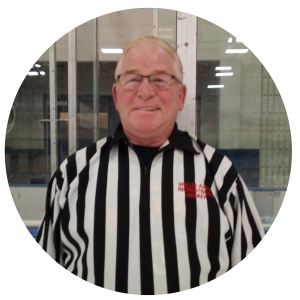 Earl was born and raised in Midland where in his youth he played both hockey and baseball at a local level as well as later at an elite level.

During his athletic career he has been a member of two provincial championship teams, he has played
internationally, and has officiated in provincial, national, and international competitions.

Earl was a member of the 61-62 Ontario Champion Midland Bantam Red Wings hockey team, played
Junior ‘C’ hockey for the Penetang Hurons, played on the all Ontario Finalists Midland Flyers Intermediate ‘A’ hockey team. He then turned professional playing for the Long Island Ducks of the Eastern Hockey League and then travelled overseas to play in the International Ice Hockey Federation (UHF) for the South Africa Canadian Maple Leafs.

Following his final season with the Midland Intermediates he joined the former Midland Penetang Referee Association where he continues to referee local recreational hockey leagues and tournaments for both men and women.

During his 45 years of refereeing he has officiated at all levels of hockey from OMHA minor hockey including Tykes to Juveniles as well as league and playoff games for OHA Major Junior A (OHL); Provincial Junior A; Senior A; Intermediate A and Junior C. During this time, he officiated in the Provincial Jr. A Centennial Cup All Canadian Finals in Guelph Ontario. He participated in three of the seven games including the final match. In 1980 he was honoured to officiate a Pre-Olympic Touring Russian team when they played a Senior A All-Star team in Orillia.

He was often called upon to officiate community fundraiser games that included the visiting Flying Fathers and at different times the Montreal Canadiens and Toronto Maple Leaf Alumni games. For years he also refereed CARHA Old Timer hockey tournament games at the local level and the provincial play downs.

In 1988 he was the recipient of the Midland Celebration 88 Awards which recognized his dedication and involvement in the community. In 2000 he refereed in the inaugural Ontario Winter Senior Games sponsored provincial OSGA. In his spare time, he spent five years coaching a team in the local woman’s hockey league.

It is fair to say that ice hockey and a referee’s whistle are synonymous with Earl Scott. The Midland Sports Hall of Fame is pleased to welcome Earl Scott in the Builder category.