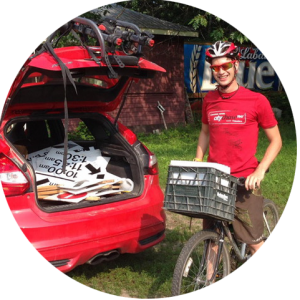 Thomas Wood is being inducted in the Midland Sports Hall of Fame in the category of builder for his
pioneering work in the sport of mountain biking.

From a very young age Thomas had an incredible passion for the sport and as a competitor he developed a vision to build a local mountain biking venue that would attract riders from the area. When he was fourteen years old in 2001, he approached Don Foster at Mountainview Ski Centre to build mountain biking specific single-track trails. His goal was to build a trail that would challenge riders of every ability.

Permission was granted and Thomas started on his project in 2002. With the help of a couple of friends he finished the trail and in 2003 hosted his first Thursday night Mountain Bike Race Series that year, sanctioned by the Ontario Cycling Association. The series continues today.

Over the years Thomas built on the success of the race series to expand the trail network and host several Ontario Cup races, High School races, and the nine-hour relay/enduro race. He also hosts instructional clinics and encourages group rides. Mountainview has come to be known as “one of the best mountain biking courses in Ontario”. 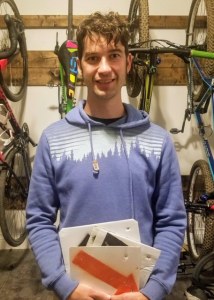 In 2007 he founded the Mountainview Cycling Club so that local mountain bikers would have an association of their own, with as many as 60 local members each year. Several members of the club have represented the area at provincial and national competitions over the years. He was recognized as “Organizer of the Year” for his efforts by the Ontario Cycling Association.

Over the last seventeen years many young women and men in the Midland area have developed remarkable mountain biking abilities and a passion for the sport under the guidance of Thomas Wood. The Board of Governors felt his contributions to the sport of mountain biking make him deserving of being inducted into the Midland Sports Hall of Fame.