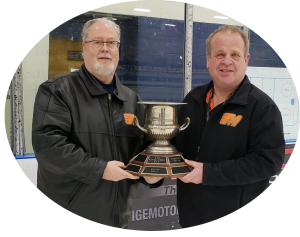 Gerry Asselin began working with the Midland Flyers Jr. C Hockey Club in 2007. Initially he was the assistant before becoming the general manager shortly thereafter.

With the passing of Hugh Robertson, the Midland Flyers needed someone to step up and continue to
operate the team or risk losing the franchise. With the proximity of the Penetang Kings the very real possibility existed that if the Flyers folded, they would never be given another franchise in the Jr. C loop.

Gerry stepped up and took on the role of president. He brought on Randy Butineau as the vice president to assist in the operation. Between the two of them the team has operated for the past 14 years, the longest management team in the history of junior hockey in Midland.

Gerry is at the rink two hours before every game performing mundane yet essential duties such as  filling the water bottles, securing granola bars and fresh fruit for the players. Before the game he will be found out front selling admission tickets and programs. Once that is completed, he is back in the dressing room helping in any way he can.

Randy’s vice president position has evolved to include General Manager and Director of Hockey Operations. He has volunteered for the bingo nights and has raised funds by acquiring new sponsors to support the team.

Further, Randy has spearheaded numerous community events including the car wash for the tornado victims, the Race Against Drugs program in cooperation with the local police force, the Salvation Army toy drive, the Radio For Radiology and other team functions in the community including marching in the Christmas parade and more recently organizing the alumni games.

Both gentlemen spend countless hours during the hockey season pursuing their duties for the team. In the off season they attend league meetings, contact potential players for the team and speak with scouts from upper tier teams that may be interested in drafting one of the current players. The Midland Flyers hockey operation is a year-round commitment, and these two gentlemen are always on top of things.

After many years working so closely together it is only appropriate that they enter the Midland Sports Hall of Fame, in the Builder category together.