Despite his quiet, unassuming nature, Jeff Attwood will always be a Marauder. Until his retirement in 2010, Jeff had spent the bulk of his life as an outstanding student-athlete and then as an esteemed teacher and coach at Midland Secondary School.

A lifelong Midland resident, Jeff was a noted MSS athlete who went on to play varsity tennis and varsity basketball at Laurentian University under national team coach Ken Shields. When he returned to his hometown and joined the MSS faculty, he combined what he had learned from Shields with his own abilities to become a noted coach in his own right.

In addition to coaching successful boys’ and girls’ high-school teams, he also helped build the boys’ spring-league basketball program, and for 20 years has run the Town of Midland/MSS Marauder basketball and sports camps every summer. Both programs have helped shape some of the town’s finest athletes, many of whom return to help as coaches, referees and organizers. He also coached a local Ontario Basketball Association team for several years and founded the now-defunct Regent Elementary School Basketball League.

“Throughout the years, Jeff has been a builder in a variety of programs ranging from cancer fundraising, basketball tournaments, alumni basketball games, championship coach of varsity basketball (male and female) and tennis teams, coordinator of the annual MSS athletic banquet slide show, designer of the school weight room, and leader among fellow staff members,” says fellow MSS teacher John Faragher, also an honoured member of the Midland Sports Hall of Fame.

“Jeff Attwood’s unassuming nature, combined with his dedication as a builder at MSS, means he would not look for accolades. However, his enduring efforts and contributions mean he deserves them.” 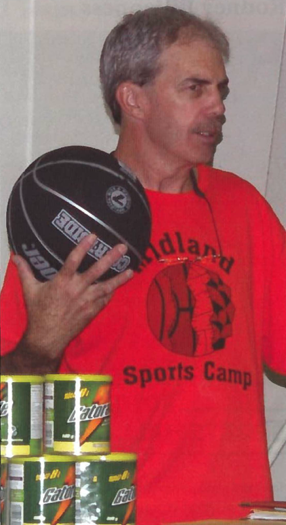