Guy Kinnear, lifelong resident of Midland, is an honoured member of the Midland Sports Hall of Fame not for his athletic exploits, but for his dedication and commitment to promoting hockey opportunities that benefitted not only the players at various levels but also fans and the community. Additionally, his influence was felt not only in this community but at the highest levels of the game, including two decades as a trainer with the Toronto Maple Leafs of the National Hockey League.

In 1955, Guy and another Midland resident, Ralph Ironsides, ventured into establishing a junior hockey team known as the Midland Red Wings. This provided young hockey players with the chance to continue in the sport they loved after their formative playing days in what was then known as the Little NHL, and what we now call minor hockey. The Red Wings lasted for 2 ½ years before moving to Penetanguishene for financial reasons. It continued there, mostly under the guidance of Pit Legault and Andy Morrison, both if whom managed Grew Boats in Penetanguishene. They were also the employers of both Guy and Ralph. With these men at the helm, and a knack for raising funds, the junior hockey club now had the stability needed for on-ice success.

After spending time as the team’s general manager, Guy returned to Midland in 1964 to operate Midland’s senior hockey club which was about to be disbanded, an unfortunate circumstance as the team was the area’s most notable fan favourite. This venture survived until 1966 when the team folded, a victim of rising costs.

The following year, Guy had a stroke of luck when Harold Ballard, owner of the NHL’s Toronto Maple Leafs, the junior Toronto Marlboros, and the Rochester Americans of the American Hockey League, asked Guy if he would be interested in being a trainer for his junior team. Guy spent the 1967-1968 and 1968-1969 seasons as the Marlboros’ trainer and, in the latter part of 1969, was sent to the Rochester Americans to be their trainer. No doubt due in part to his assistance, the team went on to win the Calder Cup.

In recognition of his expertise, in 1969, Guy became the trainer for the Toronto Maple Leafs, a position he would hold for the next 20 years, resulting in many memorable experiences from his involvement with the best hockey players in the world. They, like the hockey players and fans in the Midland-Penetanguishene area, were grateful for his dedication, vision, and expertise. 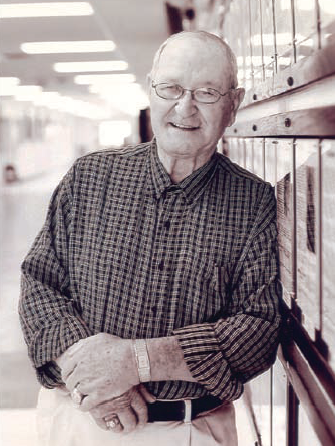