As a builder, John Gammell’s commitment to coaching and the development of youth sport, recreational facilities and related philanthropy in Midland and area since 1960 has had a significant and enduring impact. As a young athlete, John excelled in many sports. His achievements include competing at the Dominion (Canadian) Championships and/or Olympic trials in alpine skiing, cross-country skiing, swimming, and canoeing. But it is for his contributions as a builder, a cornerstone of the local sports scene, that he is being inducted into the Midland Sports Hall of Fame.

John was the founder, head coach and manager of the Midland Keegos swimming team during the years 1968 through 1976. Nationally and provincially ranked swimmers such as Kevin Hebner, Chris Kay, Kathleen King, James Moreau, Paul and Patti Cox, and a couple of hundred other local swimmers could call John “Coach”. He always went above and beyond in his efforts for youth. His son, Traver, in nominating his father, recalled his father visiting the parents of young offenders to encourage them to enroll their children in the Keegos as a positive alternative. Traver also remembers his father answering phone calls at home from former Keegos who were having trouble with the law.

His contributions as a builder are many: board member of the Ontario Swimming Coaches Association; organizing committee member, course setter and chief of course for the 1963 Canadian Nordic Championships; member, board of directors, Midland YMCA throughout the 1960s; president, Midland YMCA during the 1970s and campaign chair in the creation of the YMCA building addition to the Little Lake pool facility which replaced the old YMCA on Hugel Ave.; president, Midland Kiwanis Club in the 1970s, responsible for creating a program to teach swimming to local disabled children in coordination with Easter Seals, and coached disabled youth at regional and provincial swim meets; board of directors, Toronto Ski Club, late 1950s, director of junior alpine racing programs; coach, Southern Ontario Division Alpine Ski Team, 1958-1959; cofounder, Georgian Peaks Ski Club, 1958-1960; member of organizing committees, National Cross Country Team Trials, 1978, and North American Cross Country Championships, 1979, and course setter and chief of course for Ontario high-school, intercollegiate and provincial championships.

In 1978, John was appointed a Provincial Court judge and spent many years sitting outside of Simcoe County, then later in Barrie, Collingwood and, occasionally, Midland. Between commuting and the demands of his work, John was obliged to reduce his involvement in local activities. Since he retired in 1996, he has returned to volunteering in the community. Specifically, he was the founding president of the Huronia Communities Foundation and the driving force in its transformation from the Len Self Youth Challenge, facilitating philanthropy in the community. The HCF manages the financial endowments of philanthropists and provides, at their behest, grants to local organizations, including many sports and youth recreation groups. By 2010, the HCF had distributed almost $600,000 and managed more than $1.5 million in endowments for future bequests. Although John would be modest about his role, it is fair to say that some philanthropists have provided significant endowments to the HCF as a direct reflection of their personal trust and respect for John. 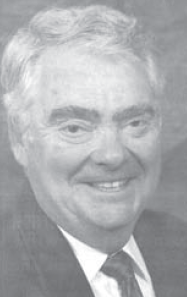