The only Midlander inducted into the Hockey Hall of Fame in Toronto, George S. Dudley helped mold the sport in his hometown, and in the world. For 35 years he served in builder positions, and because of it. became known as Mr. Hockey. Canadian hockey historian Scott Young, in his 100 Years of Dropping the Puck: a History of the Ontario Hockey Association, calls Dudley “one of the best-known figures of the game. “It could be that his quality of endless patience was born of. or honed in. decades of hockey meetings both in the OHA. where he began, and in the much larger amateur hockey world in Canada and abroad, where he eventually was recognized among the greats – without ever losing his Midland cool.” “Mr. Dudley was the best man hockey ever knew,” Jack Roxburgh, first vice president of the Canadian Amateur Hockey Association said for a 1960 obituary. “He had the ability to size up situations. bring a concise solution. He had a lawyer’s mind for summing up the case. His knowledge, experience and advice will be missed.” Dudley served in both the Canadian Amateur Hockey Association and the Ontario Hockey Association, until his death in 1960. In 1947, he was elected secretary-manager of the CAHA, the first and only person to ever hold that title. First involved with the association in 1936, he was CAHA president from 1940-42. Yet, it was as secretary-manager. that Dudley became the most important person in amateur hockey in the country. Presidents came and went, but the business of amateur hockey in Canada, from 1947 to 1960. went across the desk of his King Street law office. The lawyer. born in Midland. was first elected to the Ontario Hockey Association in 1925, serving as its president from 1934 to 1936. In 1937. he became the organization’s treasurer. serving until 1960. In his youth, he played hockey in Midland. Later, in 1931, he was the person who convinced Town Council that Midland needed an arena, which the town had been without since 1926. In his understated manner. Dudley oversaw the construction of an ice palace for Midland. The Midland Arena Gardens was completed that fall, and during the Depression of the 1930’s it boasted the only artificial ice rink between Toronto and Winnipeg. The Arena Gardens was Dudley’s monument to his community. It stood where Centennial Arena is today, and served the area for the next 45 years until fire destroyed it in July, 1976. For some 40 years. Dudley was the Town Solicitor. He graduated from Osgoode Hall in 1917 and became a law partner of William Finlayson. In addition to his hockey accomplishments. Dudley obtained the first vice-presidency of the International Ice Hockey Federation. was the president of the North American division of the federation, and administered the hockey section at the 1960 Winter Olympic Games at Squaw Valley, California. At the time of his death. on May 8, 1960, he was in line to become IIHF president. A few years before his passing in 1958, George Dudley was inducted as a Builder into the Hockey Hall of Fame in Toronto. He is the only person from Midland to be so honoured. 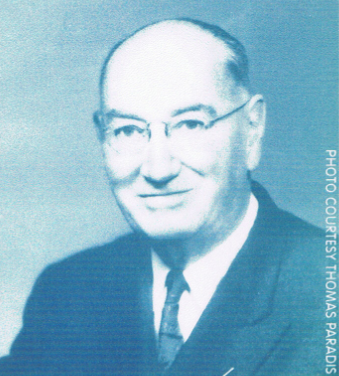