Bruce Guthrie was a hockey natural, excelling in the sport almost from the time he could skate. As a youngster, his teams went to the International Silver Stick tournament IA0 fewer than four times. The final time, when he was 15, he was awarded a bursary in recognition of his hockey and scholastic abilities. That same year, he was carded with the Jr. “B” Midland Flyers, and was drafted by the Major Jr. “A” Sault Ste. Marie Greyhounds a year later. His promising career then followed a circuitous route, unfortunately often derailed by recurring injuries. After the Soo, Bruce played with the Provincial Jr. “A” Toronto Young Nationals, and then returned to the Greyhounds. Stints followed with the Collingwood Blues and the Tier II Jr. “A” North Bay Trappers before he headed to the Utica Mohawks of the Eastern Hockey League. He was named best defenceman and rookie of the year while playing for the Mohawks. That summer, he received two calls: one from Bob Policed to attend the Chicago Blackhawks camp, and the other from Wren Blair to come down to the Hartford Whalers tryouts. He headed for Hartford, and survived 70 rookie cuts before being injured and returning home. After recuperating, he played for the Saginaw Gears of the International Hockey League for more than three years. Bruce, who was named Midland’s Sportsman of the Year in 1970 at the age of 13, received recognition at every level as an outstanding defenceman and a tremendous team player. He brought that high standard and work ethic to his coaching of minor hockey teams in Midland when he retired from competition. 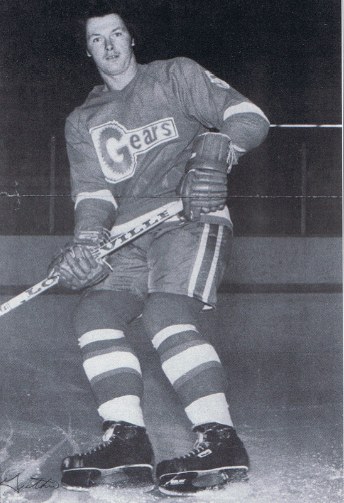