It was 4 a.m. on a brisk April morning in 1954 when Midlanders were roused from their sleep by a blaring fire engine siren. There was no cause for alarm. The Midland Red Wings had just returned home with the Ontario Hockey Association Junior ‘C championship. The Red Wings had won a hard-fought battle against the Ingersoll Reems. Midland started with two wins, beating the Reems 6-4 and 4-2. It looked like they would cruise to the title. However, a little over-confidence raised its head. Game three was handed to Ingersoll by a 6-2 score when Midland gave up three goals on a single penalty to Mike Belejac. In those days. teams had to play a man short throughout an entire penalty no matter how many goals the other team scored. The two teams split the fourth and fifth games, winning on each other’s home ice to set up the exciting sixth and final contest in Ingersoll. The last game proved to be the toughest one to win. Midland took a 1-0 lead midway through the second period. Ingersoll battled back, scoring two goals within a span of seconds while the Wings tried to kill off successive penalties. Midland dropped behind 2-1. That set the stage for some Midland heroics. Gerry Gerow scored the second of his two goals early in the third period to knot the score, then set up linemate Ken Simms for the winner with about six minutes remaining in the game. Murray Yorke. the third member of that line with Simms and Gerow. recalls that the Red Wings were a well-oiled offensive machine. “I guess if you were looking for scoring, our line was the number one line, hut everyone contributed along the way,” said Yorke. “We could score with anyone, but we also moved the puck very well out of our end.” Indeed, the trio of Yorke, Simms and Gerow ended up 1-2-3 in team scoring. Gerow and Yorke tied for the lead with 45 points apiece and Simms next with 31. All three were 20- goal scorers. But Yorke says that the Red Wings won on the strength of their great coaching. “We were coached by Roy Conacher and his NHL experience helped us. He was terrific – tough when needed hut easy and open with us most of the time. There were lots of times when some of us would go over to his place after games or practices to talk hockey and just chew the fat,” said Yorke. “We felt that everyone had a job to do and if we all did it, we’d be okay,” recalled Yorke. Ironically the Red Wings winning team included a goaltender they had already beaten. After Midland’s regular goalie, Jack Reid was sidelined with an injury early in the Ingersoll series, they picked up Don Hudson from Collingwood. Earlier. Midland had ended the Collingwood Greenshirts’ three-year run as 01-IA champions by beating them four games to one with one game tied. Yorke recollected that Hudson played well for his adoptive teammates. It was great that we got Don Hudson, since Jack Reid played great up to that point, and Hudson stepped in and gave us the same level of excellence in net.” The members of the Midland Red Wings Jr. ‘C’ champions were John Lizotte (captain), Murray Yorke, Gerry Gerow, Ken Simms, Homer Barrett, Stan Ritchie, Merv James, Jack Hendrickson, Bud Quinn, Ken Webb, Jack Reid, Charlie York (Manager), Harold Jackson (Trainer), Mike Belejac, Bruce Calvert and Larry Reid. The Red Wings’ victory won the hearts of Midland hockey fans and sealed the team’s place in Midland hockey history. They remain the only junior team to win a provincial championship. 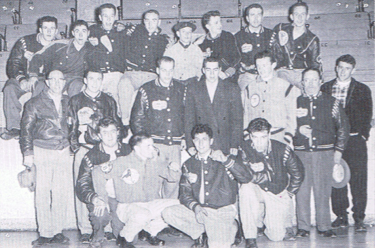