Their beginning grew from small towns as Elmvale, Midland and Penetanguishene, their success felt by the people of those comminities; but the zenth for the 1987 Russ Howard Curling Rink arrived in front of the world. It all came together for Midland-born skip Russ Howard, his brother and vice , Glenn Howard, second Tim Belcourt, lead Kent Carstairs and alternate Larry Merkley. First the team, curling out of the Permanguisne Curling Club, won the Ontario championship, then the Canadian Brier in Edmonton, and finally, the World Curling Championship. In the final march 1987 Worlds. on April 5 at Vancouver’s B.C. Place Stadium. it was for West Germany afer three ends. But Team Howard, representing Canada, tied the score in the fourth. Singles by West Germany in the fifth and ninth ends, and one by the Canadians in the seventh set up what the Midland Free Press called “a wild finish’ in the tenth end. A missed takeout by third Wolfgang Burba of West Germany allowed Canada to build the winning end, After West German skip Rodger Schmidt failed to freeze final stone to a Canadian rock. Russ Howard, known for his cool under pressure, made a simple takeout in the middle of the house to punch out the German stone and count a devastating five, to clinch a 9-5 victory and the global title before 5,667 spectator. The champions were a mixture of three veterans – the senior Howard, then 31, Carstairs, 39, and Merkley, 43 – and two promising 24-year-old curlers, namely the younger Howard and Belcourt. The Howards came from a curling family. Their father, Bill. curled for years at the Midland Curling Club. For his part, a 14-year-old Belcourt started curling at the Elmvale Curling club. A former minor hockey star, he was the youngest member with the organization. In contrast, Carstairs began the sport relatively late, at age 26 in Toronto. Now a resident of Victoria Harbour, he moved to Midland in 1973, where he first teamed with Russ at the MCC. Merkley came to the team as something of a versatile athelete. He played hockey with the Midland Bruins when they won in the 1953 Canadian Little NHL bantam title. He also played for the Midland Indians at the height of it’s basebball success. The Howard ring was fired with determination to capture the Brier in 1987, after narrlowly losing the tankard the previous year to Alberta’s Ed Lukowich. Fuelled with even more resolve, at Edmonton int 1987, after previously winning the Ontario tankard against archrivals Ed Werenich, they coasted through Breier, by going 9-2 in the round robin. They drew a bye into the final and pushed passed Bernie Sparkes of B.C., 11-7 to become the best in Canada. Ten years later, Russ is head golf pro at Brooklea Golf and Country Club. His brother manages a Beer Store in Midland. Belcourt owns a sporting goods store, while Merkley works at the PMHC. Carstairs is the cost-accounts manager at Hughes ELCAN. Although the original rink has since been disbanded, curling remains an important part of their lives. The 1987 world championship team, however, is not forgotten. In 1991, it was inducted into the Canadian Curling Hall of Fame. 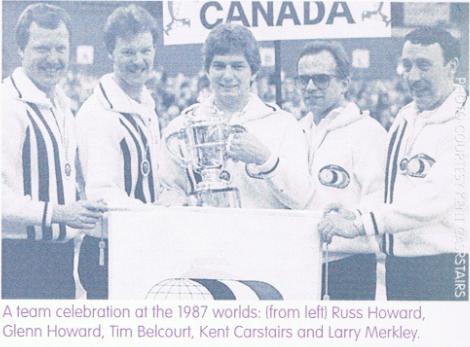