The headlines were read all across Canada that day in 1953, April 7 to be exact, when the Midland Bantam Bruins won the inaugural Dominion Little NHL Championship for players under 14. Playing on the storied ice of Maple Leaf Gardens in Toronto, they downed the Winnipeg Canadiens 5-1 in the opening game of the best-of-three series. After falling belched 1-0 after barely a minute had been played, the Bruins poured it on, with Gord Brand tying it up and John Bourgeois scoring what would be the winner. Then Brand, Don Wilcox and Ken Arbour added insurance goals before the first period ended. Whether it was on the Canadian Press news wire, or in the Toronto Star, the same descriptions were used: “Pint-sized…Cubs…Kids…Peewees.” While those words might have been accurate when referring to the physical size of these hockey players, they described the exact opposite of their collective heart and talent. These youngsters from our small town on the shores of Georgian Bay took on the best the rest of the country could offer — and won handily. In the seco. game, the Bruins came out firing with Arbour, Brand, Bob Deakos a. Ralph Ironsides all scoring in the first period. Bob Thompson added another less than a minute into the second period before Winnipeg scored to make it 5-1. Wilcox and Art Stewart killed that attempted rally with a goal each giving the Bruins a7-1 edge heading into the final period. Even with that hefty lead, Midland didn’t let up. Brand a. Deakos each notched their second goals of the game before Winnipeg scored a late meaningless goal making tlee final score 9-2. It should also be noted that there were only four penalties handed out – and Midland got all four! Team members were Gord Brand, John Bourgeois, Don Wilcox, Ken Arbour, Bob Deakos, Ralph Ironsides, Robert Thompson, Bob Thompson, Art Stewart, Joe Huston, Rodger Gray, Wayne Hook, Glenn Nicholls, Ed Desroches, Sheldon Hanes. The coaching staff included Re, Len Self, Crawford Wilcox, Claire Allsopp and William Jackson. 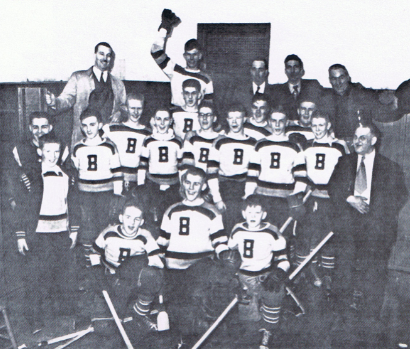