In a Rare Company of Hockey Players

A rare company of hockey players will ever reach the target of playing in the National Hockey League. Fewer still have arrived there from Midland. One of the few who did make it was Wayne King. King served three tours in the NHL during the 1970s. He played professional hockey seven years. He was a tough forward, an aggressive checker and an intrepid battler in the corners. And he could score, too. For his debut as a pro in 1971-72, King scored 22 goals for the Columbus Seals of the International Hockey League. That city’s team was the first minor-league feeder for the California Golden Seals. King’s most prolific season in pro hockey was in 1973- 74. The right winger skated for the Salt Lake City Golden Seals of the Western Hockey League, the top farm team of the NHL’s California Golden Seals. In 76 games, as a left-shot operating from the opposite wing, he had 34 goals and 34 assists. California promoted Wayne that year to the NHL, where he played his first two games. In 1974-75 the 23-year-old opened in the NHL with California, scoring his first NHL goal in Oakland against Detroit Red Wing goaltender Jim Rutherford. In 25 contests he accumulated four goals and seven assists. Against the Washington Capitals, King was bodied by Mike Marson and tore the ligaments in his knee. His ascent in the NHL was slowed but he would enjoy one more stint in the league 1975-76. Raised in Port McNicoll but born in Midland, Wayne played pickup hockey at the enclosed natural ice rink in Port McNicoll. He moved to organized leagues in Midland when he was 10, progressing to the Junior C Midland Braves. At 17, alongside the men on the Midland Flyers Intermediate B team, King helped the Flyers reach the 1968-69 OHA finals. While trying out for the Junior B Owen Sound Greys in 1968- 69, Hap Emms, the owner and general manager of the Junior A Niagara Falls Flyers, recognized Wayne’s talent. He signed the promising forward and the Port McNicoll teenager went on to play two full seasons for Niagara Falls. Wayne and his wife, Shirley, in 1978 decided they wanted a family. The couple returned to Midland and a year later their son, G. W., was born. In 1983 they had a daughter, MaKala. The Kings still reside in the town. While raising his family, Wayne worked for the past 18 years at the Penetanguishene Mental Health Centre. Through the late 1970’s to the 1980’s he remained active in amateur hockey in Simcoe County. King played for the Senior A Barrie Flyers, for the Collingwood Shipbuilders and for Midland A’s intermediate clubs. Because of the knee injury he first suffered in the NHL, Wayne no longer plays hockey or fastball, but he remains an avid golfer. 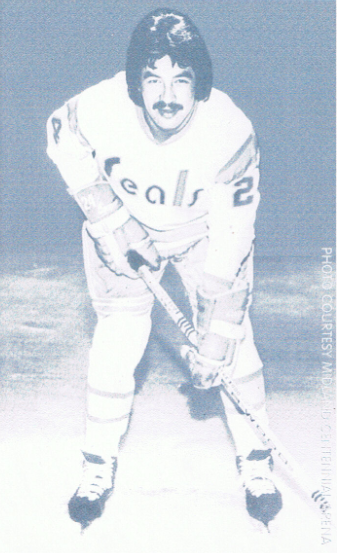