A member of the famous Conacher sporting family, Roy Conacher was the most natural hockey player among the three Conacher brothers who played in the National Hockey League. A left winger. he was a top scorer at least one season on each of the three NHL teams he played. But it is his brothers, Charlie and Lionel, who are in the Hockey Hall of Fame in Toronto. Lionel was voted Canada’s greatest male athlete of the first half of this century; Charlie was the Big Bomber on the famed Toronto Maple Leafs’ Kid Line of the 1930’s. Born in Toronto on October 5, 1916. Roy Gordon Conacher went on to play public school hockey at Jesse Ketchum School and later joined the city’s Marlboro Bantams and Marlboro Midgets. He starred for the West Toronto Nationals when they won the Memorial Cup in 1936. His twin brother Bert, skated with the same team. For his profesional debut in 1938, Conacher joined the Boston Bruins. In his rookie year. just 22 years old, he led the NHL in goals with 26, playing on a line with hall-of-fame centre Bill Cowley. Roy was also a leading candidate for rookie of the year. It was also the first of three consecutive years in which the Bruins finished first in the league. They won two Stanley Cup championships. in 1939 and 1941. In the clinching game of the 1939 finals, Conacher scored the winning goal. The one season Boston didn’t win, in 1940. Roy missed 16 games with a broken wrist. The Second World War interrupted his hockey career and consumed perhaps three of his prime playing years as he served with the Royal Candian Air Force. but Conacher returned to the Bruins for the 1946 playoffs before being traded that summer to the Detroit Red Wings. The following season he led Detroit in goals with 30. Soon into 1948, he went to the Chigaco Blackhawks, which his brother Charlie coached. It’s as a Blackhawk that Roy, in 1948-49. had his greatest individual season. He was the league’s scoring champion, with 68 points, winning the Art Ross Trophy, and was chosen all-star first team left wing at season’s end. During his last four seasons in the NHL, from 1949-52, he lived on Ellen Street in Midland. While here, Roy Conacher 1916-1984 helped persuade his Chicago team to play exhibition games at Midland Arena Gardens. Slowed by an injury, he retired in 1952, finishing with 226 career goals and 200 assists. That year, he remained in Midland, coaching the Intermediate A Midland Flyers. Later, Conacher guided the Midland Red Wings to the 1953-54 OHA Junior ‘C’ championship. He moved to British Columbia before his passing in 1984, relatively unrecognized compared to his famous brothers. Modest and slow to anger, Roy has been called the “Forgotten Conacher.” His widow, Fran lives in B. C.. but returns every year to the cottage she and Roy shared, along with Roy Jr., called Jamie, son Mark and daughter Candace. 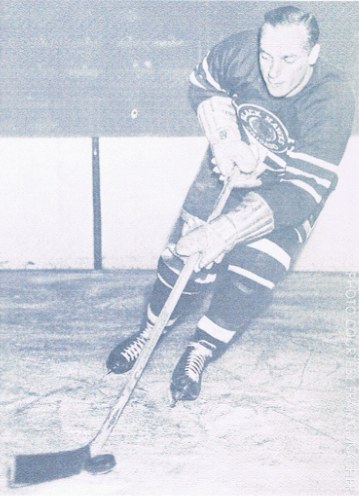