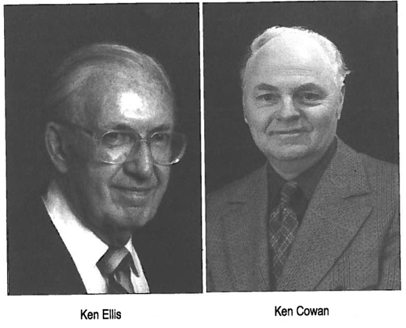 When the Midland Lawn Bowling Club opened on June 27, 1977, it was due almost totally to the efforts of two dedicated Midland residents: Ken Cowan and Ken Ellis.

Five years earlier, Ellis, who was introduced to the game during a Florida vacation, had started pursuing the concept of a lawn bowling club even though very few people in town had ever participated in the game. Undeterred, he recruited those who had bowled and who shared his vision, including Cowan. At the time, Ellis was the superintendent of schools and Cowan was the principal of Parkview (now Mundy’s Bay) Public School, but both were on the verge of retirement.

In 1975, the club leased from the Town of Midland a spectacular parcel of land on the east side of Little Lake, off King Street. Later that year, work began to clear the land and prepare for the building of the green the following spring. An existing cottage would be converted to serve as a clubhouse. As there were no funds to hire a professional greens keeper, Cowan stepped in, raking, picking stones, watering, mowing.

His daughters recall he often arose before dawn to slip out to the club to tend the green. “We knew because on more than one occasion as we were trying to quietly tiptoe in late in the night, we would meet Dad quietly tiptoe-ing out. Oops, caught again!”

Ellis would serve as the inaugural president of the club which, through successful pleas to various funding bodies such as New Horizons, Wintario and the local Civitans, and a growing membership, quickly became a thriving group. Ellis and Cowan, in addition to being accomplished bowlers, also provided leadership and instruction for many years.

Ten years after the club opened, a local newspaper would report that “the Midland Lawn Bowling Club has established itself as one of the most industrious, successful and beautiful lawn bowling clubs in Ontario.”

And to this day, one needs only to open the newspaper or visit the club during the summer to see the continuing truth of those words, and the legacy left to Midland by Ken Ellis and Ken Cowan.