For many years, Tom Shields was the voice of sports in Midland and the surrounding area. As a longtime announcer for radio station CKMP, Shields brought the atmosphere and the action of games into homes throughout North Simcoe. Whether from Midland’s baseball diamond or the Midland Arena Gardens, he enthralled fans with his vivid and accurate portrayal of Midland teams taking on their opponents.

His unparalleled play-by-play descriptions of the Midland Indians baseball games and the Midland Flyers intermediate hockey battles still live in the memories of longtime residents of the area. They also recall his lively sports talk show on CKMP, where he continually boosted local sports and the people who played them.

Shields was not only the broadcast voice of North Simcoe sports, but he wielded a formidable pen as the sports columnist for the Midland Times newspaper.

Not content just to talk or write about sports, he got involved in the organizations that made local sports possible. He served as an executive member responsible for publicity for a number of hockey clubs at the intermediate and junior levels.

“Tom made sports important by sharing his infectious enthusiasm for them with his listeners,” said Tom Paradis, in nominating Shields for induction into the Midland Sports Hall of Fame. “His humour, distinctive style, warm delivery and ability to put anyone at ease by flashing his lantern-jawed smile made him, during his time in Midland, one of the best-liked people to work in the media.” 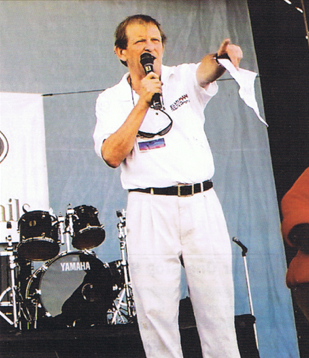