While Douglas Gadsby’s interest in sports was wide-ranging, to say the least, it would be in baseball that he would make his mark most notably on the provincial stage.

In 1981, Gadsby took a group of talented boys, the Midland Indusmin bantam rep team, to the Ontario championship. His coaching ability was evident in the fact that while this squad was talented, it had not reached its potential until Gadsby coached them.

While it may have been the pinnacle of his competitive career, it was by no means either the start or the end of his involvement in sports in the Midland area.

Ten years after that achievement, he coached and managed the Wyebridge men’s fastball team to the Simcoe Rural Fastball League championship. 15 years after they had last won the crown.

For more than 30 years, Gadsby umpired hundreds of games in Midland minor baseball, men’s fast-ball, girls’ softball and in provincial finals. He also was umpire-in-chief for the North Simcoe Umpire Association (an organization he helped found), an instructor for Softball Ontario, and coached and managed teams on several levels. He played for three years in the Simcoe Rural Fastball League as well.

Gadsby also contributed to sports off the field. serving on the Midland Parks and Recreation Board, including a stint as its chairman. In addition, he was president and a Board member of the Midland Minor Hockey Association, and worked as the game announcer and scorekeeper for Midland’s Junior C hockey team. Gadsby also was active in the Georgian Bay Hunters and Anglers Club, Simcoe County Gun Club, and golf.

In 1981 Doug Gadsby coached a bantam team to an OBA championship. Later he coached Wyebridge to the league championship in 1991 and served on the Midland Parks Board for six years. He was an active umpire and instructor for Softball Ontario for over 30 years.

He also coached and managed within the Midland Minor Hockey Association. An organizer for the North Simcoe Umpires Association, he is an active member of the Georgian Bay Hunters and Anglers, along with the Simcoe County Gun Club.

Gadsby has served as an announcer in Jr. C hockey for five years. 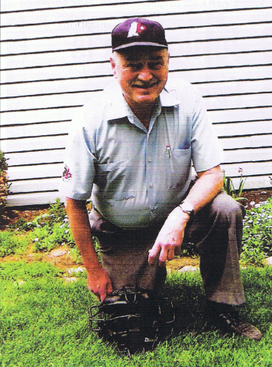