Graham Dey looked over the football field in Orillia and he was ready. It was November 19. – 1936 and the field was frozen Before the game Dey, the coach of the Midland High School junior rugby team, gathered his players together. He had their cleated shoes removed and replaced with running shoes. That simple trick would help decide the game. “Sounds just like something Graham would do,” said Roy ShakeII, an outside lineman and the captain of the Midland team, in an interview for the 1996 induction ceremonies. “The key to the championship was Graham Dey’s sophistication.” The Midland players then went out to face their opponents from the much-larger Barrie Central Collegiate. Having the rubber-soled footwear gave Midland’s juniors better traction on the slick surface. The Barrie players chose to wear regular cleats. Dey watched with pleasure as his boys breezed past hapless Barrie defenders. Midland High easily won the game, 14-1. Halfback Stew “Horsey” Harrison plunged five yards into the end zone for the first Midland touchdown. He later bolted 50 yards untouched after intercepting a Barrie pass for another major score. Frank Bray kicked the remaining points and when the game ended, Midland captured the Georgian Bay section of the Central Ontario Secondary School Association juni or rugby championship. They had earlier beaten Barrie Collegiate, Orillia and Owen Sound in the regular season. The fact that the Midland teenagers had running shoes was something of a miracle. The championship game of 1936 occurred in the trough of the Great Depression, if when some people in town couldn’t afford a square alone football meal, let equipment. Howard Henderson, the team’s centre, recalls improvising, a necessity in those lean times. “To make a pair of cleats, you’d take the blades off old hockey skates. Then you’d take the boots to the shoemaker’s. and he’d put on the cleats.” “But,” Shakell says, “we had great spirit. We wanted to play ball. When coach Dey called a practice on a Saturday – and we sometimes practised at 7:30 in the morning – everyone showed up. “Graham Dey took the raw material that was there, the talent, and welded it together. He had tried out for the Toronto Argonauts. He brought us a sophistication and knowledge about football. That made the difference.” The Midland players were Shakell, Henderson, Frank Bray, Stew Harrison, Lloyd Atkinson, Francis Swales, Jack Gerow, Bill Jory, Frank Shay, Ted Ayres, Harold Wilcox, Lloyd Smith, Dick Kedge. Bill Thompson, Bob Vowles, Marvin Gilbert. Tom Cranston, Leerning Lamb. Jack Schumaker, and Ken Swinson. Later, the Second World War claimed the lives of Bill Joiy and Leeming Lamb. Both young men were killed overseas serving Canada. Of the 20 members of the team, seven are known to still survive (in 1996). Of those. five are in Midland: Atkinson, Swales, Henderson, Shakell and Gerow. Stew Harrison is believed to reside in northern Ontario; Tom Cranston lives in Europe. “They were all good lads.” Shakell says. 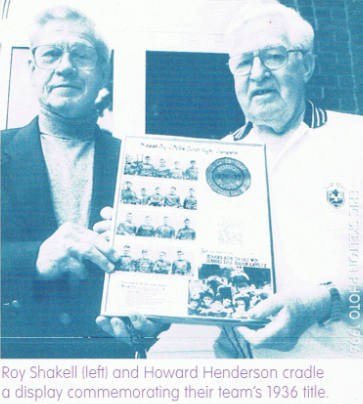 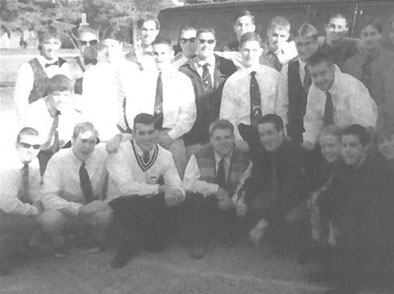